what does Seroquel look like The re-introduction of native species has recently been recognised as an effective way to restore landscape connectivity and ecological processes1. The Eurasian beaver (Castor fiber) is an ecosystem engineer with the ability to transform freshwater systems and their surrounds. Hunted to extinction in Britain between the 1500s and 1800s, beavers are now being re-introduced across the UK2. Re- introduction programmes are on the rise and research is being undertaken to establish their effect on hydrology, geomorphology and ecology.

H1 – Beaver sites harbour a higher abundance and biomass of

Samples were collected from 6 sites across the Bamff Estate in Perthshire, Scotland. These consisted of 3 beaver and 3 non-beaver sites.

This study investigated whether beavers have an independent effect on aquatic-terrestrial connectivity. The main aim was to quantify insect emergence from beaver ponds, and to relate this to feeding activity in birds. The following hypotheses were proposed

Overall, abundance and biomass of insect emergence was higher at beaver sites than non-beaver sites. Large diurnal fluctuations were present and are likely due in part to fluctuations in water temperature, particularly at beaver sites as presented in the GLMM analysis. More orders were present at beaver sites, however Diptera dominated counts across both site categories. Beaver sites saw higher bird feeding activity and more species of bird. Insectivorous birds such as swallow and flycatcher were absent from non-beaver sites. The study shows that beavers have a positive influence on emergent insects and bird feeding activity. 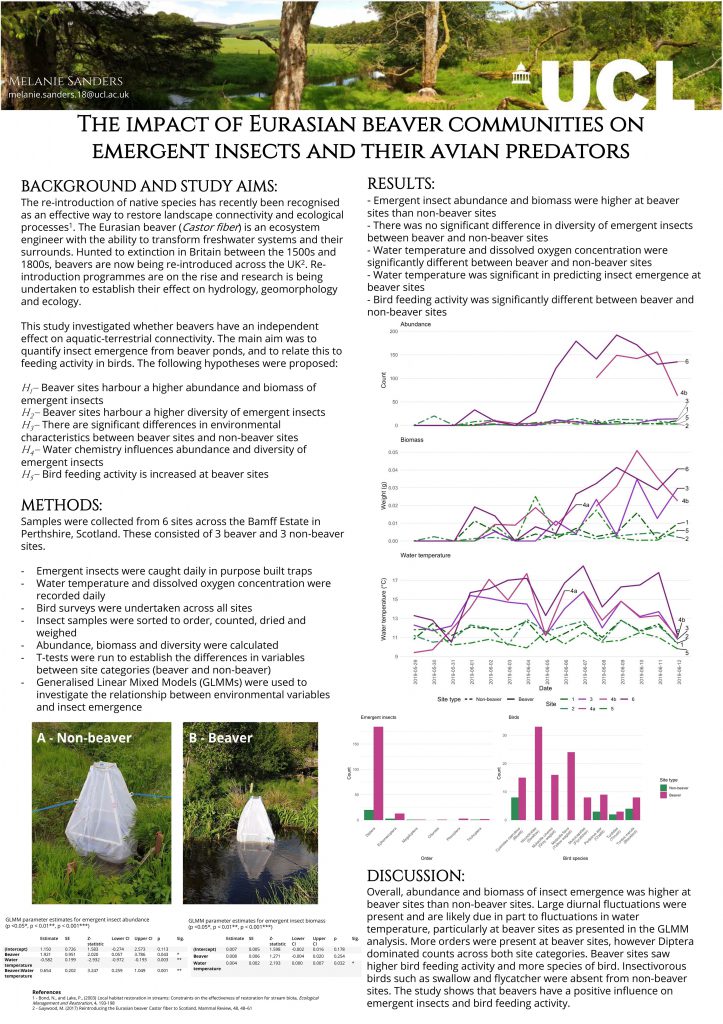