where can i buy accutane online Timeline

want to buy Quetiapine in malaysia

Bamff estate granted to the Ramsays in 1232AD

Bamff estate was granted to the Ramsay family in the year 1232 on October 9th, when Neish Ramsay, a doctor, was given the lands of Bamff, Fyal, Kinkeadly and Ardormie, as a reward for saving the life of his patient, King Alexander II of Scotland. He is reputed to have removed a hairball from his stomach in an early successful operation. Local legend tells a longer story involving a magic potion made of a white snake caught at the cave behind the Reekie Linn waterfall.

Paul and Louise Ramsay arrive at Bamff in March 1981

Paul and Louise Ramsay arrive to take over the family estate. At this point it is a farm with 130 acres dedicated to growing barley, and the remaining land mostly dedicated cattle and sheep farming. Some woodland already exists, including the Taybridge Wood plantation of Norway Spruce established in the mid 1950s. An 18th century drainage ditch traversed the central section of the lowland area of the estate.

In the early 1990s, the forestry commission were encouraging farmers to plant more trees. However, conservationists were applying pressure for more planting of broadleaf woodland. This presented Paul Ramsay with the ideal opportunity to create a “wet wood” thus helping the western area of the estate return to its original wetland state.

Paul Ramsay was keen to restore the forest cover long disappeared upon the two hills on the northern part of the estate. This was to be a many decades long process beginning in 1992 with a pinewood scheme covering 100 acres.

The move to 100% organic farming began in 1994. The neighbouring family of the Mitchells, who were responsible for the farming element of the Bamff estate since 1991, made the decision, much to the Ramsay’s approval, of turning to organic farming.

The “countryside premium scheme” of 1997 supported the the widening of water margins, allowing the drainage ditch to metamorphose into narrow strip of new wetland. Additionally the scheme also supported a large amount of mixed hedges to be introduced, including hawthorn, blackthorn, hazel and dog rose. The creation of a new pond in the western region was also supported by this scheme.

Captive beavers escape from the Auchingarrich wildlife park in 2001

Whilst beavers were yet to be officially reintroduced in the UK, there were captive beavers in some locations, such as the Auchingarrich wildlife park in Perthshire. Beavers escaped from this park in 2001 and established themselves in the Tay catchment area.

Wild boar introduced at Bamff in 2002

Wild boar were introduced at Bamff in 2002 as a keystone species to help rewild part of the landscape through their rootling habits and consequent natural regeneration. A family troop of boar were often seen roaming around until their eventual escape in 2014.

The Ramsays bring beavers to Bamff in early 2002

The first beavers to be introduced in Scotland, in a habitat where they had enough space to roam and feed without assistance, were at Bamff in spring 2002, when a male and female beaver from Norway were released into the western most area of Bamff known as the Gauldswell Bog; an area that was restored to wetland status through measures which began a decade earlier. Both beavers were not to survive for long as one was injured, most probably by kickback from a tree, and the other infected by liver fluke.

Two new beavers released into the Bamff pond in July 2002

Two sister beavers of Polish/Russian origin, brought up to Scotland by Devon based conservationist Derek Gow, were introduced into the main pond at Bamff in July 2002.

The next stage in reforesting the hilltops, which began in 1992, entered its next phase in 2002, with a new area of native pine planted supported by the native pinewood scheme.

A male beaver was introduced in autumn 2004 into the main pond, in order to mate with one or both of the existing females. Both females produced offspring thus establishing a true beaver population at Bamff.

Beavers migrate back to the West Wards area in 2007

Whilst the original location for the first Bamff beavers was at the West Wards wetlands, the first family was established further east at the main pond. Some beavers decided to then move back to West Wards area where they established a new base, and the emergence of the 2nd beaver family.

Reforestation on hills continues in 2008

Another opportunity arose in 2008 to continue further the process of reforestation upon the hills to plant a woodland supported the Forestry Industry who in turn were supported by the Scottish Government.

Native and deciduous trees planted on Hilton Hill in 2018

Reforestation of the hills steps up a gear as a mixed woodland is newly planted on Hilton Hill; including Oak, Juniper, Scots Pine, Rowan, Holly, Birch and Hazel.

To mark the beginning of the new Wildland Project, an array of tree cages were constructed to both enhance existing hedges and to provide a greater future seed source for two fields in preparation for their rewilding.

First ever public event on behalf of Bamff Wildland – teaming up with the Alyth Development Trust and overseen by ecologist Alan Ross: a community “bug hunt” collating invertebrate base-line data.

In preparation for the Bamff Wildland project, sheep were permanently removed by farmers Andrew and Peter Mitchell from the lower 12 fields at Bamff, leaving these fields fallow for one year until free roaming grazers were due to arrive.

The Bamff Wildland Crowdfunder was launched. All of its targets were smashed the following month, thus paving the way ahead for the new Bamff Wildland project.

The first of a sequence of rewilding interventions begins following the success of the crowdfunder. Beginning with osprey platforms and barn owl boxes. Then followed by the construction of the perimeter fence, the sowing of yellow rattle seeds and the digging of ponds and scrapes.

With 120mph wind gusts coming from the north, Storm Arwen caused a huge amount of devastation across north and east Scotland. Bamff’s Tay Bridge Wood was transformed overnight. Countless spruces toppled over forcing a new chapter in the history of the woodlands at Bamff. Further storms were to come in the following months toppling even more. Native species remained largely unaffected. 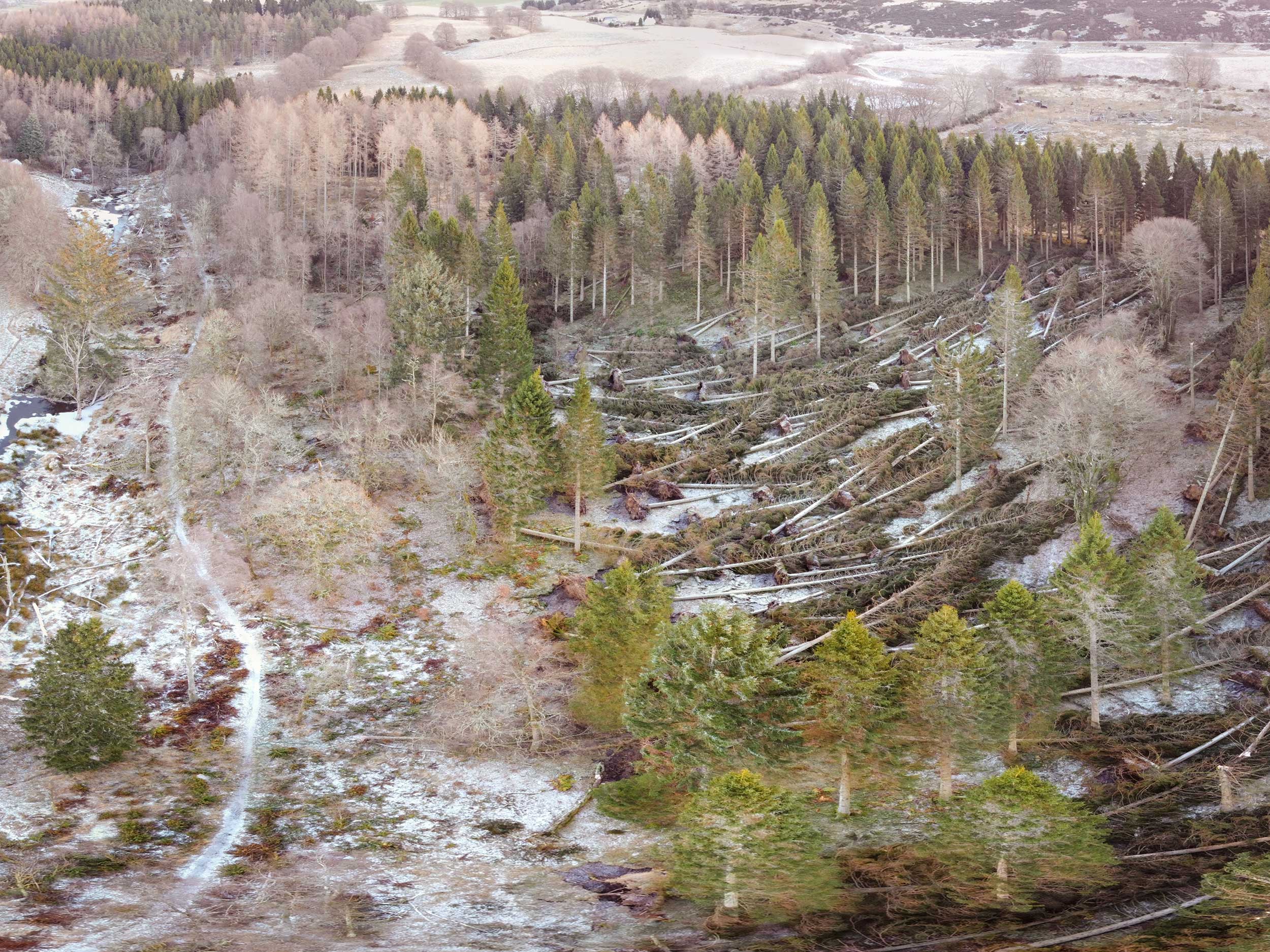