prednisone back order Bamff has no major body of water or flowing river, but a number of historic wetland areas exist and also the potential for re-establishing those far more extensively – particularly with respect to the west to east flowing agricultural ditch which, after centuries of farming, has become largely naturalised due to recent beaver activity..

Mbouda By far the largest single body of water is an artificial creation; the Bamff pond, and is situated in a naturally marshy area. The result of a victorian curling pond drained in the early 20th century to create what resembles a natural lochan, it was designed to be used as a boating pond, the depth of which is never any more than about 1m. The curling pond’s original location, slightly to the east, is now an expansive marshland area (closer to its original form) with patches of smaller ponds that the resident beavers have helped to expand and maintain. 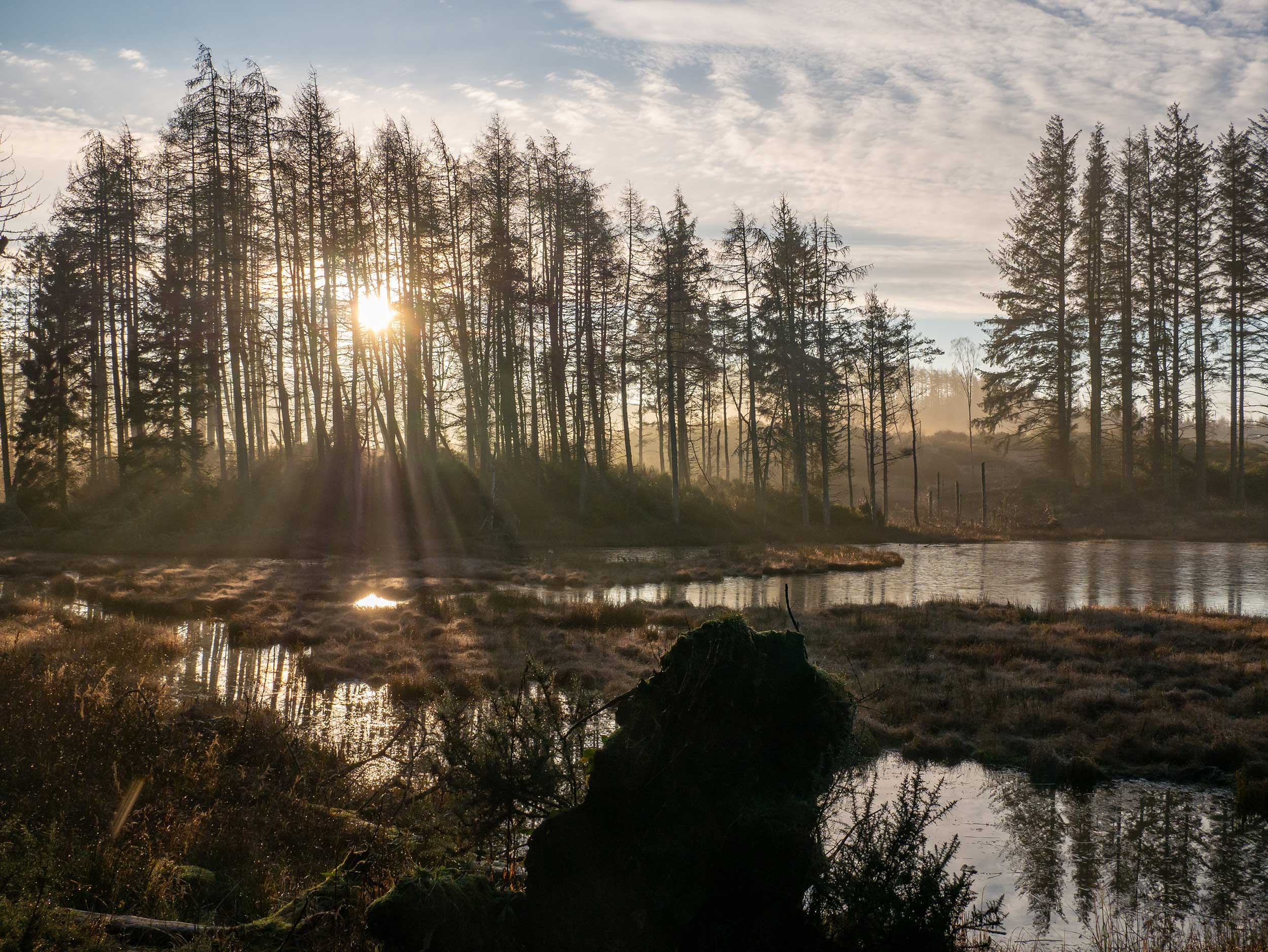 Indeed, the main pond has a significantly large dam to the west; actually a collaboration between an artificial barrage and beaver constructions (also with two adjacent beaver lodges nearby), which prevents this relatively large body of water from flooding the main drive. The overflow from the barrage nevertheless creates a little meandering stream that crosses twice under the front drive before heading towards the gate lodge and eventually joining with the Alyth Burn beyond.

The family of beavers residing at the pond (a pair were introduced here in 2002) moved on, leaving it to be a spectacular and sculptural region immersed in mystery and inhabited by numerous species of duck, swans and as a regular haunt of herons. Beavers – perhaps descendants of the original family – return here from time to time.

Until the early 2020s, sheep and cattle farming have dominated Bamff for centuries. Consequently the fields have been severely fenced for so long and, until recent decades, any flowing water limited to narrow ditches and agricultural run-offs, some of which originate in the Bamff hills to the north, and others which traverse the estate from west to east. However, the dominant west-east ditch is currently a supreme example of what can happen when beavers are allowed to create their own habitat.

To the extreme west in an area formerly known as the Gauldswell Bog, the beavers were first introduced by Paul Ramsay in the early 2000s. Ten years earlier Ramsay, empowered by vaguely related suggestions from the Forestry Commission, decided to begin the creation of a “wet wood”; a type of habitat that was present there many centuries earlier. This became the perfect location to introduce beavers a decade later.

The beavers proceeded to construct a huge dam, probably the longest in the UK at about 150m, which has transformed the entire area; aerial images such as the one below reveal this colossal construction far more clearly than at ground level. As one heads further east downstream, a series of smaller dams are present leading to intersections with other ditches; naturally they have also been the centre of attention for much more beaver activity.

This ditch, now effectively upgraded to a burn, flows underneath the two drives that lead to Bamff House. Between these two drives a new wetland area has been evolving either side of the burn through the shifting of agricultural (now rewilded) fields further away from the water margin whilst simultaneously introducing some new riparian planting. Naturally the beavers have capitalised on this and a sequence of dams are to be found along this stretch. 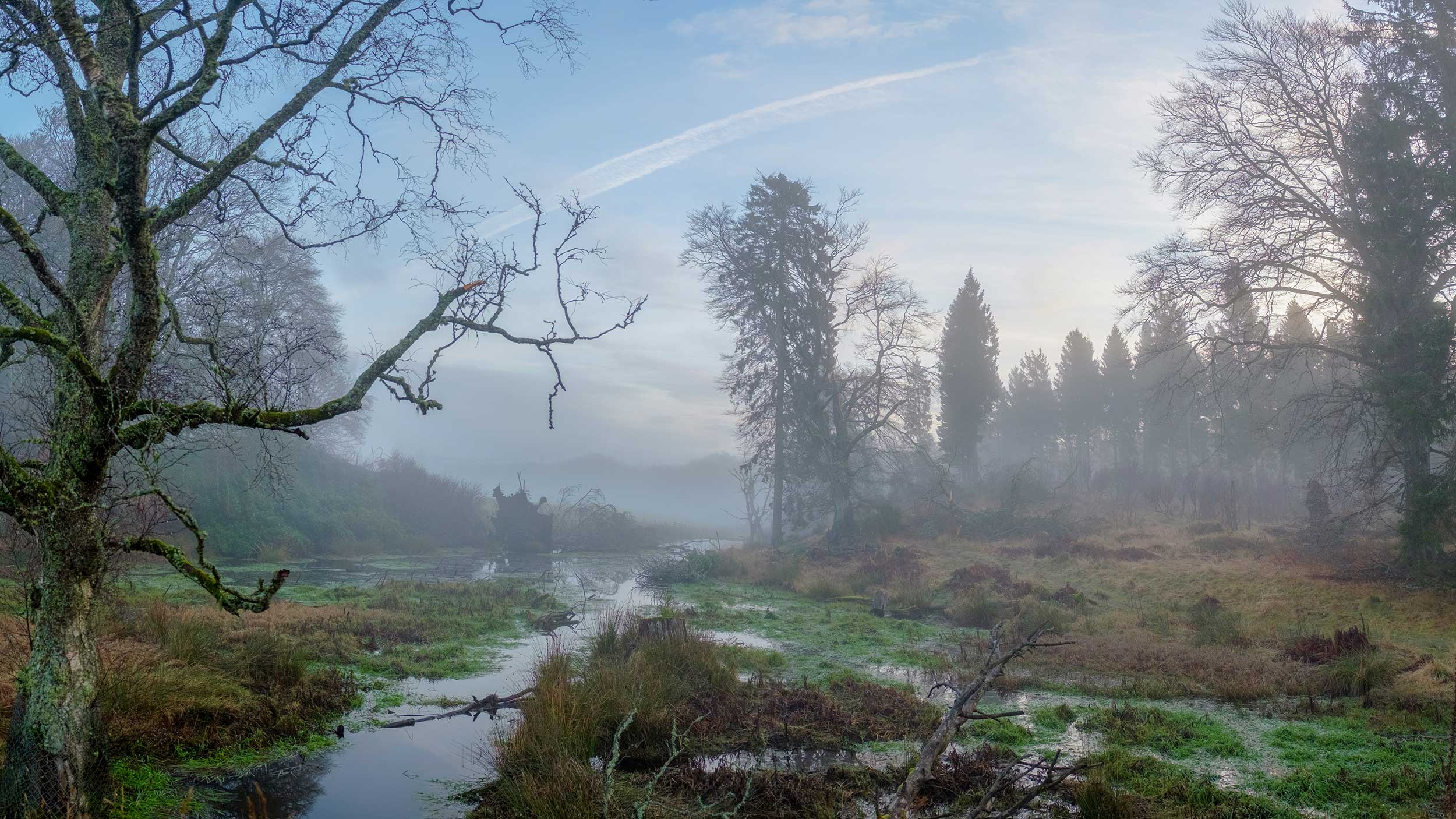 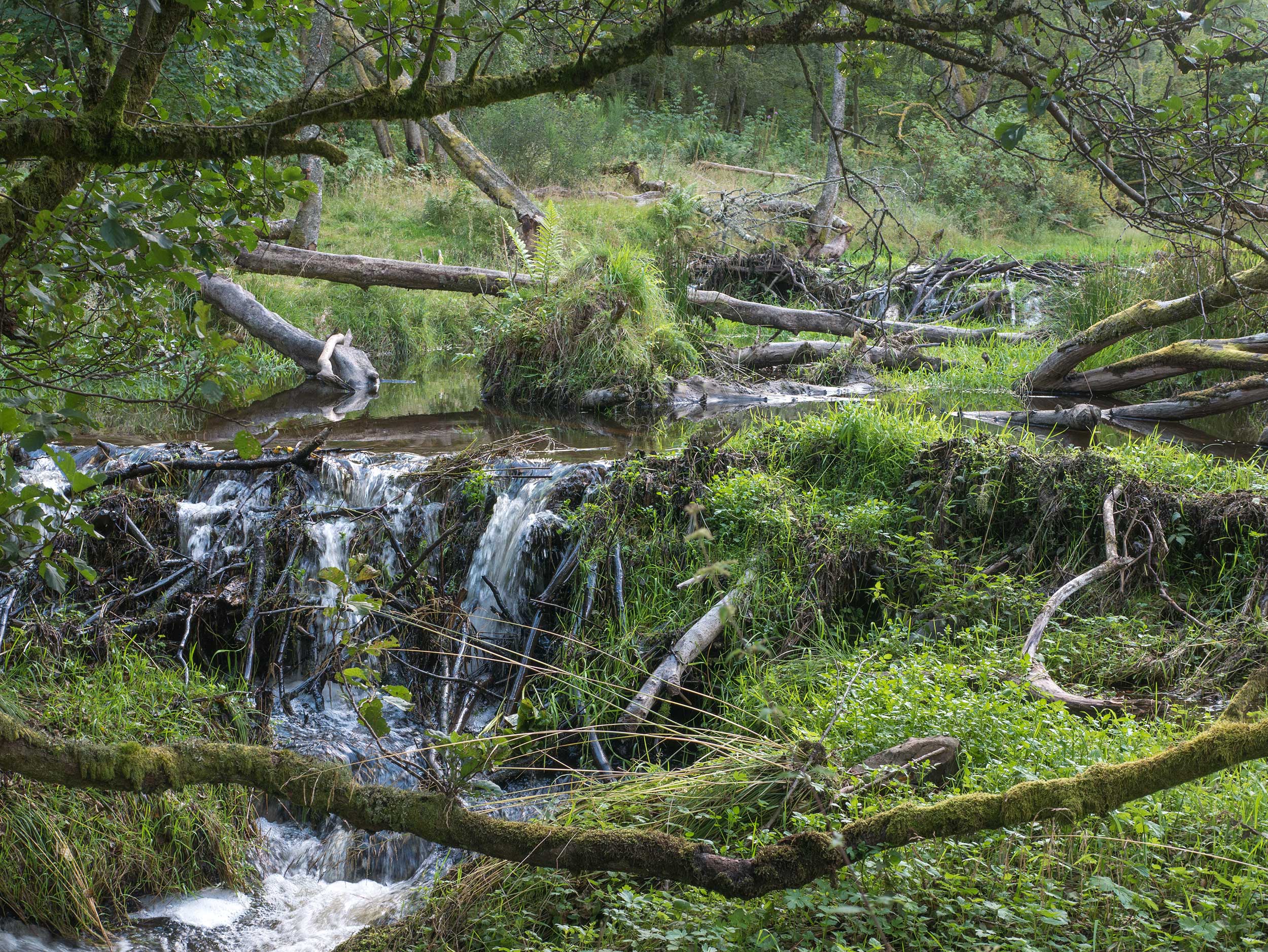 However, when the water crosses east under the front drive, a whole new and richly diverse domain is to be witnessed; a series of impressive ponds, pools and dams (numbering at least 11 in total) that descend towards the derelict residential structure known as the “Burnieshed” before hurtling down the steep Burnieshed Den.

The first and largest pond is also the location of another beaver lodge, home to the “celebrity” beavers of Bamff; a family that ecotourists are able to view relatively easily, especially at dawn & dusk in the spring & summer months. Travelling along the path (a part of the Cateran Trail) which follows the burn’s flow, beaver activity is in evidence in all directions – sometimes even far into the woodland to the south. Felled trees, snedded young trees, sculptures of beaver cut wood, chippings, beaver lawns, beaver canals and beaver slides are typically found. But crucially, a shockingly abundant amount of new growth has appeared from both natural coppicing, and also the emergence of new young native trees.

The stark contrast of this wetland landscape to the thin and meagre agricultural ditch that flowed there until the first decade of the 21 century is overwhelming.

Whilst the Burnieshed array is a jewel in Bamff’s crown, equally impressive is the cascading series of dams which establish a wholly different territory by following the main Bamff drive downhill towards the gate lodge, before eventually merging with the Alyth burn.

This slightly steeper series of pools and dams, populating the stream created by the Bamff Pond’s overflow, shows clear evidence that downhill flooding can be hugely mitigated by the presence of beavers. The beaver activity ends when it coincides with the edge of the estate. Beyond this point, even in the most ferociously wet weather, the ensuing flow of water is genteel and contained. If the dams were absent, the water would tumble ferociously and cause further problems to the nearby residents of Alyth, who regularly experience devastating flooding from the Alyth burn. Whilst some beavers have more recently made a home for themselves in the Alyth burn, the absence of any dams, possibly due to the width and velocity of the current, means it is unstoppable in periods of heavy rain and snow.

Bamff’s rewilding activities will dramatically evolve during the 2020s. The issue of the climate emergency and of severe biodiversity loss makes this a truly urgent endeavour.

In addition to the new woodland enhancements, wetland enhancements include the digging of scrapes and ponds to provide more habitat for water species, and a series of new riparian planting schemes.

All this is achieved by the removal of sheep farming from approximately a dozen fields, which took place at the end of 2020.